The piece has the saying “Escribo Con La Tinta Negra Y La TInta Roja,” I write with the black and red ink. It is a reference to pre-columbian, mesoamerican beliefs in the importance of the Toltecatls, the artist who drew the codex. 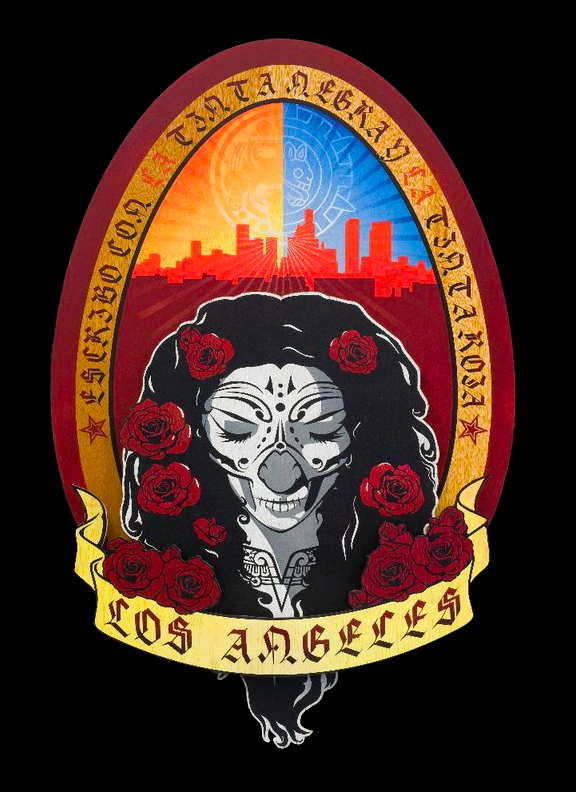 Here are a few pics and a statement for the altar I did for Tropico de Nopal.

My altar is in honor of my ancestors and the struggles they have persevered. It also makes a statement on contemporary issues. In January 2006 I traveled to Chiapas Mexico as part of a People of Color’s Delegation to the Zapatistas autonomous zones. I witnessed first hand the disastrous effects of globalization, NAFTA (North Atlantic Free Trade Agreement), and the growing influence of multinational corporations on the world’s environment.

One of the effects of NAFTA was the displacement of thousands of Mayans from their indigenous lands causing many to migrate north to the United States seeking jobs. I also was witness to the over 30 thousand Zapatistas that marched into San Cristobal de las Casas as part of the beginning rally for La otra campaña. I find beauty in that struggle in opposition to oppression and seek to represent it in my work.

The nopal that is the centerpiece is modeled after one growing in my backyard. I rescued the nopal from the South Central Farm on June 13th 2006, the same day over 300 Sheriffs and LAPD officers raided the farm and evicted the farmers along with protestors and activist. Just as no one could have imagined the nopal would have ended up in Pomona I used it to draw parallels to the migration patterns of Mexican’s though out our history in this land.

The nopal it self serves as an important symbol. Replacing the traditional family tree with a nopal seemed much more appropriate. I set the nopal in the context of the Los Angeles city skyline to juxtapose the natural garden being transplanted into the concrete city by the farm workers. Like the nopal I find we share similar characteristics. We are tough, resilient, and when forced to, we flourish elsewhere even in the harshest of conditions.

These images where taken in 2005/2006 while on a People of Color Delegation to the territories controlled by the Zapatistas in Chiapas, Mexico.

So life is always interesting around LA, especially as an artist. Decided to finally blog about it.